Moon Dragon Dojo (formerly Tuyê’t Tan Dojo) has been sharing Cuong Nhu Oriental Martial Arts with adults and kids for over 25 years in Berkeley. Our dojo is led by Master Allyson Appen who has been teaching Cuong Nhu for nearly 40 years. Our instructors (mostly women) are dedicated to teaching martial in an open and positive way, and find joy and satisfaction from helping our students learn and grow as martial artists and as people.

We often talk of the dojo as our family, and if you choose to train here, you’ll see why after a short time. We support each other both in and out of the dojo with a spirit that starts from our workouts together, and grows through our friendships over the years. 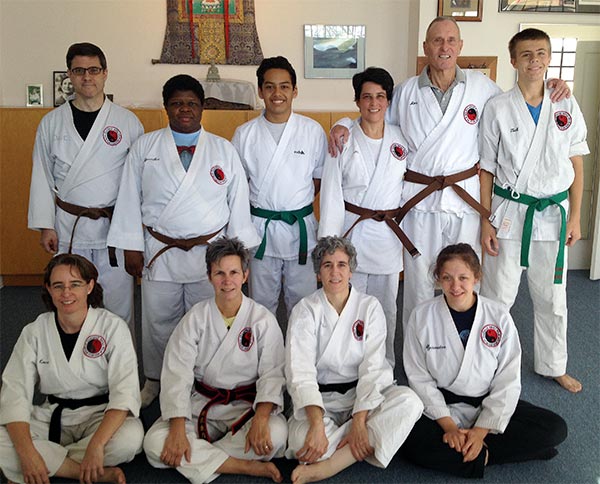 Master Allyson Appen, Co-Head Instructor, Shichidan, seventh degree black belt
Teaching and training for over 40 years in Cuong Nhu, Master Allyson has complemented her Cuong Nhu expertise with six years of aikido and three years of judo, she is now concentrating on developing her skills in internal arts: taiji and qigong. Allyson stresses alignment and technique over strength, and believes in the power of a positive attitude — that and I love seeing the surprise and delight in a student’s face when they accomplish something they did not think possible. It’s the best!
— Master Allysonclasses should be really fun. She served as president of the Cuong Nhu Board of Directors as well as for years as regional representative. Selected as “Martial Artist of the Year” in 2000 by the Pacific Association of Women Martial Artists (PAWMA), Allyson has also served on the PAWMA board of directors. She was inducted into the Association of Women Martial Arts Instructors (AWMAI) Hall of Fame in 2015.

Rosanne Boudreau, Co-Head Instructor, Sandan, third degree black belt
Sensei Rosanne has been teaching and training in Cuong Nhu for 14 years and has enriched her training with four years of judo. Rosanne initially started Cuong Nhu as a way to physically challenge herself and get in shape. She quickly became hooked by the fun classes, the supportive community of teachers and classmates and the benefits to fitness of mind, body, and spirit. Rosanne loves teaching and training and continues to learn and grow with her dojo mates. Confucius:
I hear and I forget. I see and I remember. I do and I understand.Sensei Rosanne served for three years on the Pacific Association of Women Martial Artists (PAWMA) Board of Directors and was elected president of the board for the year 2012. She is currently the Cuong Nhu Regional Representative for the Western Region. 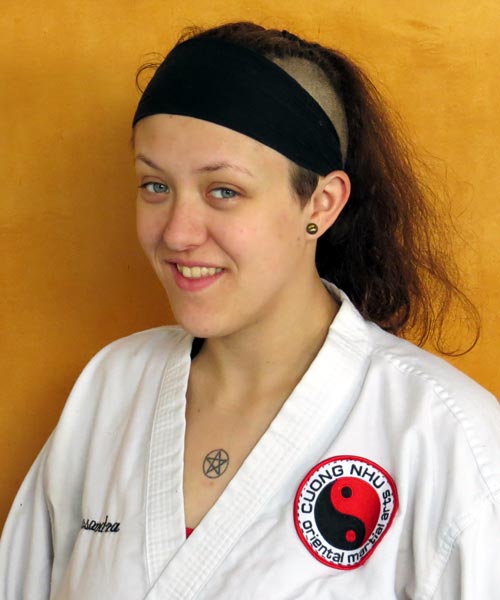 Alyssandra Yochelson, Nidan, second degree black belt
Alyssandra started martial arts in 2007 when they were 15 years old. Now working their way through the struggles of young adulthood while maintaining their strength, willpower and committing to the study of Cuong Nhu. Alyssandra passed their black belt test May of 2013 and earned the first red stripe (or Shodan rank) in the summer of 2014. Plans for the future include someday starting their own dojo, but that won’t be until they have finished college at least. Their strengths within the style itself would be the performance of the katas (pre-arranged combat technique forms, similar to steps in a dance) but Alyssandra loves grappling and self-defense as well. They’re very proud that they placed 1st and 2nd at the Berkeley Cuong Nhu Kata tournament in 2014.  Don’t ever tell me you “can’t,” just say “I can’t yet.” Doubting yourself is the surest way to fail.
— Sensei AlyssandraAlyssandra loves coming to class and working hard as a way to de-stress from life — it’s like magic as a good solid workout will make any anxiety simply vanish like smoke in the evening sky. Alyssandra enjoys teaching classes even though teaching “grown-ups” is still mildly intimidating; but they’ll never back down from the challenge or the chance to teach anyone something new and enjoyable. Alyssandra complements their Cuong Nhu training with 7 years of gymnastics and a year of cheerleading. They also continue to dance on a regular basis, applying the grace and fluidity into their martial arts training.

Jennifer Argle, Nidan, second degree black belt
In early 2008 Sensei Jennifer began training at Moon Dragon (then known as Tuyê’t Tan) dojo as part of her recuperation from a stroke in the summer of 2006. She was drawn to the eclecticism of Cuong Nhu that allows each student to develop creatively and she is grateful to have instructors who encouraged her throughout the years. Part of growing as a Black Belt is learning to teach, which is my main focus now.
— Sensei JenniferIn May 2014, she received her Black Belt. Sensei Jennifer has regularly attended the Cuong Nhu national and west coast training camps as well as other martial arts seminars. She has also complemented her Cuong Nhu training with a year of Brazilian Jiu-Jitsu.